HYDERABAD: With no concrete decision on water sharing from Srisailam and Nagarjunasagar dams at Krishna River Management Board (KRMB) meeting, Andhra Pradesh is fearing the worst water crisis in the ensuing summer. With only 30 TMC feet water available at Srisailam which has to be shared with Telangana, many AP towns and cities are glaring at severe water shortage. While the demand for drinking water alone is over 100 TMC feet for next six months, near empty dams in the two states are sending shock waves in the two governments.

"The KRMB which met on Wednesday did not take any decision on water sharing between two states as statistics presented by two states differ. We are submitting our water consumption details again to set the record straight," said Adithyanath Das, principal se cretary , AP irrigation department.

Water level at Srisailam plummeted to a new low at 835 feet against 857 feet last year. The reservoir now has only 55 TMC out of which only 30 TMC feet can be utilized for the next six months. Similarly , Nagarjunasagar which had 226 TMC feet water last year is now looking almost empty . At 508.5 feet which is below minimum draw down level (MDDL), the dam has only 129.14 TMC feet water of which only 9 TMC feet can be released through pumping.

"Never in the recent past both reservoirs touched MDDL in the month of December. River Krishna used to get fresh inflows in Sep tember, October and November to fill two major dams.This year, both dams failed to cross MDDL even during monsoon period. This is clear indication that a severe drinking water crisis is certain," said a senior engineer in Telangana irrigation department.


Major towns and cities in Krishna, West Godavari, Guntur and Prakasam districts depend on Krishna water for their drinking water needs. Already most of the towns reported water shortage and cut down supplies.Machilipatnam, Eluru, Nuzivid, Tenali and Ongole already imposed restrictions on the water supplies. Chirala, Parchur, Narasaraopet, Tiruvuru, Bapatla, Sattenapalli and Markapur reported severe shortage. Rural water supply department has deployed additional water tankers in three districts.
To overcome the drinking water crisis, the AP government is planning to request the KRMB not to tamper the water sharing met hod decided by the Brijesh Kumar Tribunal that allot ed 512 TMC to AP and 299 TMC for Telangana. AP is planning to request release of 30 TMC feet to meet drin king water needs in three phases January , March and May . Reserves at Pulichin hala also dried up as avai able water was released to save the standing crop in Krishna delta.


The Pulichinthala pro ect hardly has any water in he reservoir even as drin king water requirement in Krishna district set to doub e with the construction of capital city near Amaravati State government is expec ing a higher demand for drinking water as more and more people are relocating to Amaravati region.

"Sharing of available 30 TMC feet water should be do ne in the ratio decided by the water tribunal and at the same time, severe water shortage in Krishna delta must be given consideration by KRMB," pointed AP irri gation officials.

VARANASI: A survey report of The Energy and Resources Institute (TERI) says that 80% of Varanasi respondents feel that water quality of the Ganga has an impact on their health.

The TERI Environmental Survey 2015 was released on Wednesday and aims to gauge the perception, awareness, opinion and behavior of people towards environment in seven Indian cities, including Varanasi.

TERI is an independent, not-for-profit research institute focused on energy, environment, and sustainable development and devoted to efficient and sustainable use of natural resources.

The survey had three focus areas: overall environment, health and environment and environment in river cities. A total of 15,145 people were surveyed in these cities, including 2012 in Varanasi. The respondents were distributed across different age groups, occupation and educational background and income levels.

According to the survey, only 5% of the respondents felt that the river water in Varanasi was in good condition. About 58% felt that the odor in the surrounding areas of the Ganga has worsened, while 96% of them found river water unsafe to drink without treatment.

Nearly 72% held individual citizens responsible for the current condition of the river, followed by industries (15%) and local government/municipal corporation (13%). About 55% of the respondents had heard about the National Mission for Clean Ganga, followed by 31% who had heard about it but did not know the details of the Mission. About 65% respondents thought that the mission would be successful in achieving its goal.

Majority of the respondents thought the reason for this to be variability in rainfall (66%) followed by excessive diversion and use of water for agriculture and industrial activity (nearly 45%).

While 54% of the respondents thought that the river has become more flood prone and devastating in the last five years, 70% attributed this to encroachment on the river and floodplains and 48% thought variability in rainfall. About 56% of respondents identified solid waste being dumped into the river and lack of government or municipality's initiative to clean the river (54%) to be the prime reasons for poor quality of the city's river.

Nearly 50% of the respondents felt that the environmental indicators such as number of bird and insect species, air quality, surface water quality, green cover and waste and waste management had worsened in the past five years. Nearly 56% of them identified human activities such as industrial activity, transportation, construction and deforestation to be the cause of changing climate patterns, whereas 43% perceived it to be a natural process.

While 62% felt that temperature had increased, 81% of the respondents thought rainfall to have decreased during the last five years, and 63% opined that frequency of extreme events, such as heat waves, floods and droughts had increased. About 56% felt that no government policies or legislations exist relating to wastewater treatment, 55% felt the same for groundwater usage and water conservation and 49% for water supply and climate change.

Interestingly, around 67% felt that the Central government's "Swachh Bharat Abhiyan" will be a success in improving the quality of the rivers flowing through the cities.

About 48% identified water quality as the issue with greatest visible impact on human health. Waste and air quality was also identified by 31% and 21% respectively, to be the problem with the most visible impact on human health. About 63% perceived that water-borne diseases are majorly caused by bad quality of environment, and 51% said the same for respiratory diseases.
Posted by Unknown at 02:21 No comments:

June 19, 2014 11:36 am
Coca-Cola bottling plant has been ordered to close in northern India due to water problem. 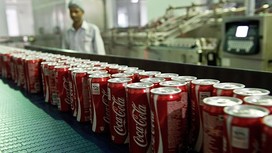 A Coca-Cola bottling plant has been ordered to close in northern India after local farmers blamed it for using too much water, creating fresh headaches for the world’s biggest soft-drinks maker in one of its most important markets.
Authorities withdrew consent for the Hindustan Coca-Cola Beverages plant in the state of Uttar Pradesh, where ground-water levels have been critical for more than a decade, according to the government.
The plant closure comes as water scarcity rises up the list of risks facing multinational companies operating in regions where supplies are limited. Acute water shortages are widespread in India, largely because of wasteful irrigation practices that successive governments have struggled to address.
Campaigners applauded the move, which comes 10 years after another Coca-Cola bottling plant, in the southern state of Kerala, was closed after residents claimed it was draining and polluting local water supplies.
“This is a great victory and a welcome confirmation that local communities can successfully take on big, powerful business,” Nandlal Master, who has taken part in the local campaign against the multinational drinks group, told India Resource Center, an organization that campaigns against corporate globalization.
The Kerala incident galvanized awareness about water risks among global companies. Many, including Coke, have since made efforts to improve their own use of water, as well as that of local communities.
Hindustan Coca-Cola Beverages said the closure was “unprecedented” and allegations that its water usage was irresponsible were “misleading and false”.
The bottling plant said it had used the water “very responsibly and judiciously,” adding that it had a “shared interest in the sustainability of water resources”.
Coke has said India could be one of its five biggest markets within the next few years and plans to invest about $5bn in the country between 2012 and 2020.
As temperatures soar in India, this is peak season for the country’s soft drinks industry. However, the shutdown is expected to have little impact on Coke’s business as the single-line plant is one of its smallest bottling units, producing an estimated 26,500 kiloliters of beverage a year.
The move to close the bottling plant came as Coke sought permission to expand the facility. The closure also raises questions over the ease of doing business in India.
Posted by Unknown at 03:49 No comments: